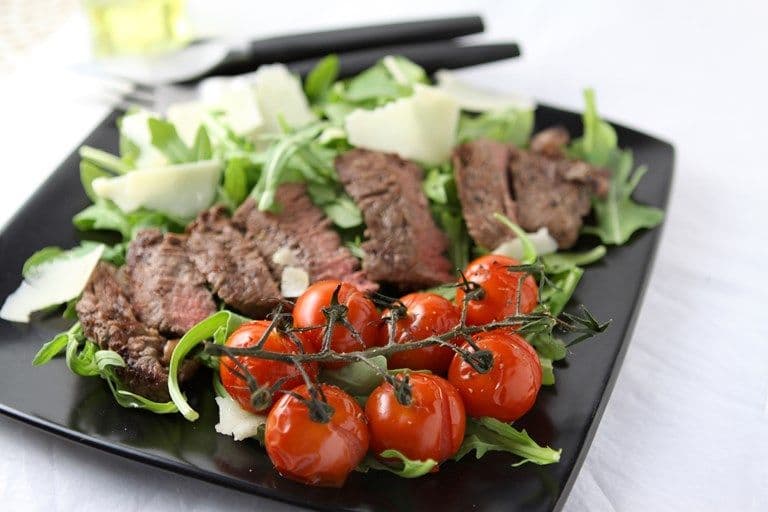 Piccolo tomatoes, 2 branches with about 8 tomatoes on each

2. Place the tomatoes in a shallow oven-proof dish, splash them with a good glug of olive oil and sprinkle with oregano. Roast for about 10 minutes or until the skins just begin to burst

3. In the meantime, heat a cast-iron skillet (or a gas barbecue) until very hot. Brush the steaks with olive oil and season with salt and pepper

4. Place them in the pan or on the gas barbecue and cook just until moisture beads start to appear on the top surface, then turn over and cook the other side. You want the meat to be still pink in the centre, so stop cooking when pressing down on the meat with a fork feels like pressing on the fleshy pad at the base of your thumb

5. Remove the steaks from the pan or barbecue, cover with foil and allow to rest for a few minutes. Divide the rocket leaves between two plates

6. Slice the steak thinly across the grain on a chopping board, then arrange each steak's slices on a plate of rocket. Sprinkle the shaved cheese over each plate, add the tomatoes still on their vine, and finish off with a splash of lemon juice and extra-virgin olive oil
© Copyright 2011-2021 Frank Godfrey Limited All rights reserved