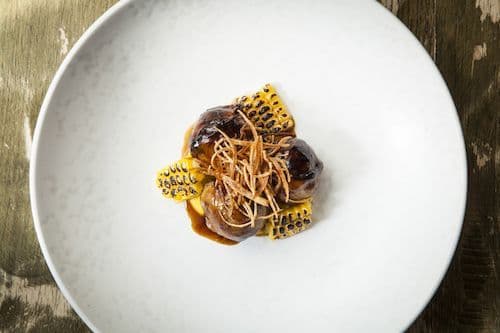 TO SERVE
1 corn on the cob, husked

200ml of grapeseed oil, for deep-frying

1. To make the faggots, mix all the ingredients (apart from the oil, chicken stock and caul fat) together in a mixing bowl until thoroughly combined. Roll the mixture into 12 balls, each weighing around 30–35g each, then wrap each ball tightly in caul fat. Set aside in the fridge until ready to cook

2. For the crispy shallots, heat the oil in a heavy-based saucepan to 160°C. Slice the quartered shallots as thinly as possible (ideally on a mandoline), then deep-fry for a few minutes until golden brown. Drain on kitchen paper and set aside

3 . For the sweetcorn purée, sweat the diced onion in the oil until soft but not coloured. Add the (drained) tinned sweetcorn with the chicken stock and bring to the boil. Season to taste, then transfer the mixture to a blender and blitz until completely smooth. Transfer into a clean pan for reheating later

4. Preheat an oven to 160°C/gas mark 3 and bring a pan of salted water to the boil 5. Add a dash of grapeseed oil to an ovenproof frying pan over a medium-high heat. Add the faggots to the pan, ensuring the side with the caul fat seal is cooked first. Fry for a few minutes, flipping the faggots occasionally, until browned all over 6. Meanwhile, add the corn on the cob to the boiling water and cook for 8–10 minutes 7. Once the faggots are browned all over, pour in the chicken stock and transfer the pan to the oven. Cook for 6–8 minutes. Meanwhile, gently reheat the sweetcorn purée

8. Drain the cooked corn on the cob and slice off 12 sections of the kernels. Use a blowtorch to char them and set aside

9. To serve, place a spoonful of sweetcorn purée on the base of each plate. Top with 3 faggots per plate, along with a little of the pan juices, then arrange the blowtorched sweetcorn around them. Finish with the crispy shallots
© Copyright 2011-2021 Frank Godfrey Limited All rights reserved