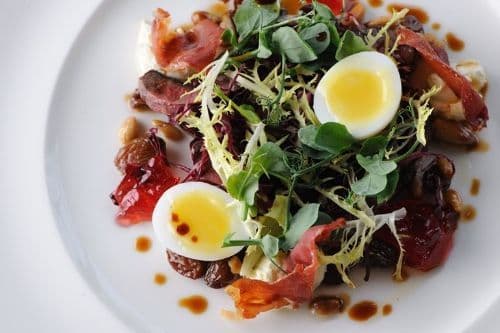 50g of bacon, cut into lardons

1. For the red wine reduction, place a large pan on a high heat. Add a small amount of vegetable oil and brown off the pigeon bones on all sides. Once evenly caramelised remove and transfer to a casserole dish

2. Place a small frying pan over a medium to high heat, add a little vegetable oil and a knob of butter. Caramelise the button mushrooms until dark and golden

3. Preheat the oven to 180˚C/gas mark 4. Cut the tomatoes in half and place flat side down on a tray with a little water. Place in the oven and roast until soft and caramelised. Once all the vegetables are caramelised, add to casserole dish with the pigeon and bacon

4. Brown off the bacon in the same pan, remove and place with the pigeon bones. Add a little more oil and the butter to the pan and caramelise the onions, carrots, leeks, celery and garlic

6. For the vinaigrette, whisk the mustard and vinegar together and then gradually add the oil slowly to emulsify. Season with a little salt and pepper to taste and refrigerate

7. Once the wine has reduced, add to pigeon, bacon and caramelised vegetables. Add the veal and chicken stocks, peppercorns, thyme and bay. Bring to a simmer and skim off any impurities that rise to the top

8. Simmer for 1 hour then pass the reduction through a fine strainer. Place back on the heat and reduce to a thin syrup like consistency. Season to taste and pass through fine sieve again

9. For the pigeon salad, slice the ham to setting one on your slicer, alternatively ask your local deli to do this for you

10. Lay the sliced ham on an oven tray and place under the grill on a medium to high heat until crisp. Leave the ham to cool, and then break into smaller pieces. Store in an airtight container until required

11. To prepare the quail eggs, bring a medium sized pot of water to the boil. Lower the eggs into the boiling water for 2 minutes 15 seconds, then refresh in iced water. Peel and set aside for later use

12. Toast the pine nuts in the oven until golden brown. Place the sultanas in a pan and cover with water. Bring to the boil, drain and place on absorbent towel to absorb any excess moisture

13. To prepare the salad, pick the light green parts of the frisée and wash in cold water, drain. Carefully pick pea shoots but do not wash. Remove outer leaves from radicchio leaving the crunchy crisp inner leaves or heart

14. Roughly cut through the radicchio leaves and place in a large bowl with the frisée and pea shoots. Add in the pine nuts, and sultanas and season with salt. Place to one side while preparing the wood pigeon

15. Preheat the oven to 180˚C/gas mark 4. Generously season the pigeons with salt and pepper and place into the oven for 8 minutes (pigeon should be served pink so do not be tempted to over-cook). Remove from the oven and allow to rest for 5 minutes

16. Remove the breasts from the pigeons and slice evenly into strips

17. Distribute the pigeon evenly across the middle of 4 plates and scatter the pine nuts and sultanas around. Add the crème fraiche and redcurrant jelly to the plates